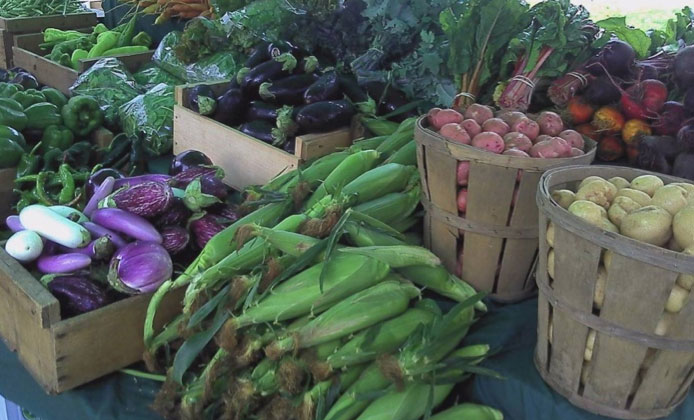 By your Century Fitness Training staff

Are you ready to take advantage of the fresh food found right here in Massachusetts? Celebrate food grown locally and needs no artificial anything – including packaging. Just go to a farm stand, farm, or farmer’s market and bring a couple of green bags to load up on what earth has to offer!

Here’s what Boston Magazine is saying about what is fresh for August:

Prime berry season (starts in July and continues)… We’re talking blueberries (July-September), raspberries (July-October), blackberries (July-August). It’s an avalanche of berries. “Sometimes at the markets we go to, they are loaded with berries because everything comes in at the same time,” Stillman says.

And, of course, there’s corn (July-October). Contrary to popular belief, and the demand that comes with the season’s barbecue celebrations, corn isn’t typically at peak deliciousness until midway through the month.

…Peaches (July-October). The fruit, coveted in the summer for its juicy, tart sweetness, is apparently not a sure thing (due to the possibility of unusually warm temperatures or severe Artic chills from the past winter).

“August is definitely the high point for us,” she says. “August and the beginning of September. We pretty much have everything. Not only do we have green peppers, we also have the colored peppers. We have every variety of eggplant. You start to see watermelon.”